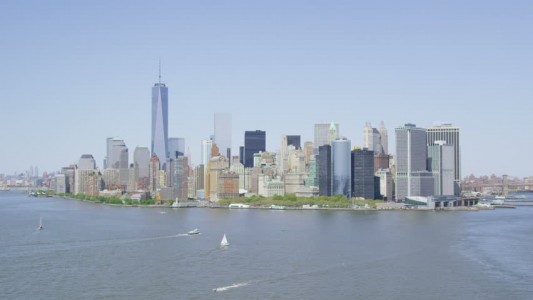 25 Minutes or Less From St.George To Midtown!

Staten Island Borough President James S. Oddo and NY Waterway President and Founder Arthur E. Imperatore today announced the framework of an agreement that will bring fast ferry service for commuters from a new dock to be constructed in St. George to the West 39th Street Ferry Terminal in Midtown.

The service would improve the trip for those commuting to Midtown, who currently either take express buses or take the Staten Island Ferry to various subway lines. A trip on the new ferry to West 39th Street would take approximately the same time as it currently takes the Staten Island Ferry to arrive at its destination at Whitehall in downtown Manhattan. In addition, those utilizing the new ferry would have access to New York Waterway’s free connecting bus service from their Midtown terminal to other Midtown destinations, with seven free routes covering a multitude of work destinations between 57thStreet and Canal Street.

This would give commuters back some of their valuable time currently spent in commuting, either in traffic or on various subway lines waiting to get to their Midtown destinations. For example, for a resident living in St. George

BP Oddo said, “Twenty-five minutes from St. George to Midtown. Twenty-five minutes. This is not the answer to all our traffic or commuting woes. But this has been a successful collaboration, entirely outside of citywide government, between us at Borough Hall and the private sector, to get Staten Islanders the possibility of a better commute. This mission continues on various fronts. Let me be clear, this does not negate the City’s obligations to our borough in its ‘5 Borough (since renamed ‘Citywide,’ but still inaccurate) Ferry Service at a subsidized fare. That fight continues. In the interim, we have been exhausting all options and possibilities to create a new fast ferry route to give Staten Islanders more choices.

“It is an honor to work with Borough President James Oddo and to have this opportunity to improve the quality of life for Staten Islanders with safe, reliable, environmentally-friendly commuter ferry service,” Mr. Imperatore said.  “NY Waterway has a +99 percent on-time performance record, the most reliable mass transit system in the Metropolitan Area.  Staten Islanders will know with certainty when they will get to work – and more importantly, when they will get home.”

“NYCEDC is thrilled to celebrate the continued growth of Downtown Staten Island,” said NYCEDC President James Patchett. “The New York Wheel, Empire Outlets, Lighthouse Pointand New Stapleton Waterfront together will bring 2,000 jobs and more than $1.6 billion in investment to Staten Island’s North Shore. Additional ferry service will bring even more energy to the area, and it should surprise absolutely no one that Borough President James Oddo is the person who has brought everyone closer to making it a reality.”

The new service will run throughout the day to service commuters. The price has not yet been determined, but Mr. Imperatore promised it would be fair and attractive to commuters given the faster and more certain commute for Staten Islanders, many of whom now take more than two hours to get to Midtown.

The Loneliest Whale: The Search for 52 – National Lighthouse Museum

The Loneliest Whale: The Search for 52 – National Lighthouse Museum