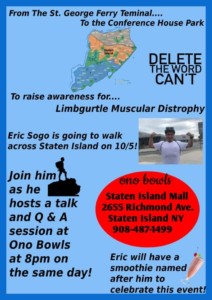 On Saturday, October 5th, 2019 Staten Islander Eric Sogo will be taking on a great feat. Eric Sogomonian will be walking through Staten Island, from the St. George ferry terminal to the Conference house in Tottenville. Once that is done, he will then walk from the Conference house back to the Staten Island Mall. So, what is the big deal? Eric was born with  Limbgurtle muscular dystrophy. Limb-girdle (Limbgurtle) muscular dystrophy is a term for a group of diseases that cause weakness and wasting of the muscles in the arms and legs. The muscles most affected are those closest to the body (proximal muscles), specifically the muscles of the shoulders, upper arms, pelvic area, and thighs. People who met Eric often treated him differently, as an outsider because of this disease. Eric felt invisible. People around him looked at the disease had rather than the person he was.

Many around Eric told him that he will not achieve many goals. However, Eric was destined to make a difference.  Influenced by the attitudes around him, Eric let himself s believe that the others were correct. Eric has worked hard to disprove perceptions of him. He discovered that he was capable of amazing accomplishments and other peoples opinions do not reflect his abilities. Limb-girdle muscular dystrophy causes weakness and wasting of the muscles in the arms and legs. The severity, age of onset, and features of limb-girdle muscle dystrophy vary among the many with the condition and may be inconsistent even within the same family. Signs and symptoms may first appear at any age and generally worsen with time, although in some cases they remain mild. Intelligence is generally unaffected in limb-girdle muscular dystrophy.  Eric believes that no one should be told they “Can’t. He has learned from his experience that he can make a difference and help to prevent others who suffer the way he did. Eric Believe that a person’s life is theirs and nobody else’s.” He says “Do what you want, what you can.”

Eric Sogomonian has been told that “He can’t” his whole life.  Eric now wants to prove that the word “can’t” is nothing more than a mental dampener. He believes that if you keep hearing negativity, you’ll start to believe it and stop doing things you love. It stops one from even the simplest things in the worst-case scenario. If you don’t push yourself, you will never know what you can achieve.

Eric is taking on this mission that YOU can do anything you want to, you should not let anything or anyone stop you from being your best every day.  This personal challenge to accomplish his goal, Eric also brings awareness of Limbgurtle muscular dystrophy. Mr. Sogomonian is a Motivational Speaker who is trying to change the world. He recently graduated from the College of Staten Island on May 2019. Now working as an active volunteer at the Staten Island University Hospital and is striving to step into the position of Practice Office Associate. Eric is continually aspiring to motivate as many people as he possibly can.

Both the walk and the Q&A/talk are happening on October 5th, 2019. I will be leaving my house at approximately 12:15 at night and that’s when my journey for the day begins.  The Q&A/talk is happening at 8 pm at Ono Bowls, 2655 Richmond Avenue, Staten Island Mall, Staten Island, NY.

Please support Eric in his mission to help people learn “As long as you are alive, you can”.  Support him during his trek around Staten Island helping his cause. Eric Sogomonian shows those who define others by limitations that they are wrong. Once you have goals set you CAN accomplish them.  Eric’s slogan is “#DELETETHEWORDCANT”. You can follow Eric on Instagram at @EricSogo2019 or email him for more information ericsogo@gmail.com.