A margarita is a cocktail consisting of tequila, orange liqueur, and lime juice often served with salt on the rim of the glass. The drink is served shaken with ice (on the rocks), blended with ice (frozen margarita), or without ice (straight up). Although it has become acceptable to serve a margarita in a wide variety of glass types, ranging from cocktail and wine glasses to pint glasses and even large schooners, the drink is traditionally served in the eponymous margarita glass, a stepped-diameter variant of a cocktail glass or champagne coupe.

The history of the margarita is one of folklore due to its numerous origin stories.[1][2] According to cocktail historian David Wondrich, the margarita is related to the brandy daisy (margarita is Spanish for “daisy”), remade with tequila instead of brandy. (Daisies are a family of cocktails that include a base spirit, liqueur, and citrus. A sidecar and gin daisy are other related drinks.) There is an account from 1936 of Iowa newspaper editor James Graham finding such a cocktail in Tijuana, years before any of the other margarita “creation myths”.[3]

1937 Cafe Royal Cocktail Book contains a recipe for a Picador using the same concentrations of tequila, triple sec and lime juice as a margarita.[4] One of the earliest stories is of the margarita being invented in 1938 by Carlos “Danny” Herrera at his restaurant Rancho La Gloria, halfway between Tijuana and Rosarito, Baja California, created for customer and former Ziegfeld dancer Marjorie King, who was allergic to many spirits, but not to tequila.[5][6][2] This story was related by Herrera and also by bartender Albert Hernandez, acknowledged for popularizing a margarita in San Diego after 1947, at the La Plaza restaurant in La Jolla.[7] The story was debunked in 1992 by the San Diego Reader.[1]

According to Jose Cuervo, the cocktail was invented in 1938 by a bartender in honor of Mexican showgirl Rita de la Rosa.[8]

Hussong’s Cantina also claims to have been the site of the margarita’s creation in Ensenada, Baja California, in 1941.[9][10] Bartender Don Carlos Orozco reputedly named a new drink after Mexican-German patron Margarita Henkel Cesena, a frequent customer to the cantina.[1] Cesena was a ranch operator by trade, and it is disputed whether she was the daughter of a German ambassador as the story claims.[11][12] Hussong’s, however, has enjoyed widespread popularity as the home of the original margarita.[13][14]

There are also claims that the margarita was first mixed in Juárez, Chihuahua at Tommy’s Place Bar on July 4, 1942, by Francisco “Pancho” Morales. Morales later left bartending in Mexico to become a US citizen, where he worked as a milkman for 25 years. Mexico’s official news agency Notimex and many experts have said Morales has the strongest claim to having invented the margarita.[15]

Others say the inventor was Dallas socialite Margarita Sames, when she concocted the drink for her guests at her Acapulco, Guerrero vacation home in 1948. Tommy Hilton reportedly attended, bringing the drink back to the Hilton chain of hotels. However, Jose Cuervo was already running ad campaigns for the margarita three years earlier, in 1945, with the slogan, “Margarita: It’s more than a girl’s name.”[16] 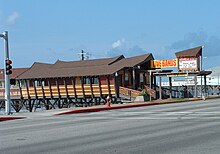 Another common origin tale begins the cocktail’s history at the legendary Balinese Room in Galveston, Texas where, in 1948, head bartender Santos Cruz created the margarita for singer Peggy (Margaret) Lee. He supposedly named it after the Spanish version of her name, Margarita.[17]

The first known publication of a margarita recipe was in the December 1953 issue of Esquire, with a recipe calling for an ounce of tequila, a dash of triple sec and the juice of half a lime or lemon. A recipe for a tequila-based cocktail first appeared in the 1930 book My New Cocktail Book by G. F. Steele. Without noting a specific recipe or inventor, a drink called the Tequila Daisy was mentioned in the Syracuse Herald as early as 1936. Margarita is Spanish for Daisy, which is a nickname for Margaret.[18]

A later, certainly false, story is that the margarita was invented in October 1961, at a party in Houston, Texas, by party goer Robert James “Rusty” Thomson while acting as bartender. He concocted a mixture of equal parts tequila, Controy orange liqueur, lime, and crushed ice in a salt-rimmed glass.[19][20][21] However, Thomson’s recipe was made with Damiana Liqueur, not Cointreau orange liqueur. It is said that the idea was an experiment after running out of rum while making frozen daiquiris. 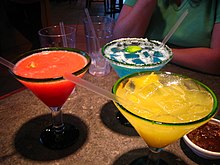 Margaritas come in a variety of flavors and colors.

The IBA (IBA Official list of Cocktails) standard is 10:4:3, that is tequila:triple sec:fresh lime juice.[22]

The “Original Margarita” recipe as given by Cointreau on their website has slightly more of their own sweet liqueur: 1 part white tequila, 1⁄2 part Cointreau, and 1⁄2 part fresh squeezed lime juice.[23]

Freshly squeezed lime juice is the key ingredient. The most common lime in the United States is the thick-skinned Persian lime. However, margaritas in Mexico are generally made with Mexican limes (Key limes). These are small, thin-skinned limes and have more tart and an often bitter flavor compared to Persian limes.[25][26]

The frozen margarita is a margarita served as an ice slush, similar to other tropical-inspired frozen mixed drinks like the hurricane or piña colada. The ingredients can be processed with ice in a kitchen blender, or for larger output, a slush or soft-serve ice cream machine is used: a cooled, horizontal cylinder has a rotating impeller which churns the mix so it will not freeze solid, and the thick half-frozen slush is dispensed from a spout. Frozen margaritas were first served in La Jolla, when Albert Hernandez Sr. stopped using crushed ice and instead combined the ingredients in a blender in 1947.[7][27] The dedicated frozen margarita machine was introduced by Mariano Martinez in Dallas in 1971.[28]

Fruity sodas such as fruit punch, lime, pineapple, or mandarin orange Jarritos, or sports drinks such as blue or orange Gatorade,[31][29] can substitute for triple sec.[32] A margarita made with orange soda and beer is a sunrise beer margarita; if it is made with carbonated fruit punch soda, it is a sunset margarita.[33] The variant that uses grapefruit soda is called a Paloma.

Other fruits and vegetables

Alternate fruits and juice mixtures can also be used in a margarita. Fruits like mango,[34] peach, strawberry,[35] banana, melon, raspberry, or avocado[36] are suitable for creating this drink. Orange juice and pomegranate juice (poured down the inner side of the glass) can make a sunset margarita (so named because the orange is at the top and the red at the bottom).[37] Many recipes call for a splash of orange juice. These days, margarita can be prepared in many different ways. When the word “margarita” is used by itself, it typically refers to the lime or lemon juice margarita, but when other juices are used, the fruits are typically added as adjectives in the name; with lime juice or lemon juice added to give it a characteristic margarita flavor (a wedge of lime is often added to the glass). Other varieties of margarita include fruit margarita, top-shelf margarita and virgin margarita.

A beermarita (or Coronarita)[45] is a beer cocktail that has a bottle of Corona beer or other light-flavored beer[46] poured upside down into a margarita on the rocks.[47]

A skinny margarita may be one that is purportedly lower in calories (possibly using artificial sweeteners) or one that uses fresh juices rather than a prepared mix.[48]

Another recipe uses only tequila and some concentrated lime juice.[50]

A margarita with vodka substituted for tequila is a kamikaze. 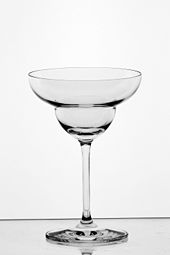 The margarita cocktail was the December 1953 “Drink of the Month” in Esquire‘ magazine, with this recipe:[51]

Pour over crushed ice, stir. Rub the rim of a stem glass with rind of lemon or lime, spin in salt—pour, and sip.

It was further popularized by the 1977 song “Margaritaville” by Jimmy Buffett, and in 2004 it was described as “the most popular mixed drink in America”.[52] It was used in the title of the 1983 single “Margarita Time” by British rock band Status Quo and was the inspiration for the cover artwork.[53][54]

The margarita may be popular because, in addition to sweet and sour flavors, it includes salt.[55]