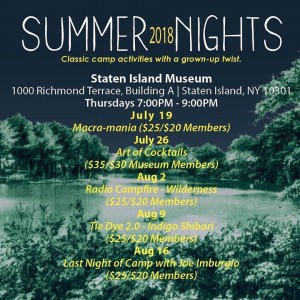 Staten Island Museum Summer Nights Aug 16. The only way to close out a memorable summer is with a talent show. This night of comedy is the final installment of the 2018 Summer Nights series. The museum has established a connection to the art of comedy by way of our latest exhibitionImpractical Jokers: Homecoming. Guest curator for the exhibition and Impractical Jokers comedy producer Joe Imburgio will co-host with comedian, writer, and performer for Comedy Central, Tim Duffy.

This is an exciting opportunity to see a carefully selected group of professional comedians whose resumes include performances at major comedy venues such as Caroline’s and the Comedy Cellar, as well as credits for producing work on Comedy Central, Funny or Die, and Impractical Jokers.

Free onsite parking is available or the S40 bus 10 minutes from the Staten Island Ferry. Tickets are on sale now at www.StatenIslandMuseum.org.

About the Staten Island Museum
Founded in 1881 and celebrating its 137th year, the Staten Island Museum engages visitors with interdisciplinary exhibitions and educational programs that explore the dynamic connections between natural science, art, and history based on its diverse collections. The Museum is open Wednesday – Sunday: 11 am –  Summer Late Nights! The Museum will be open till 9pmevery Thursday through August 30, 2018. Universally accessible. For current exhibits, visit StatenIslandMuseum.org