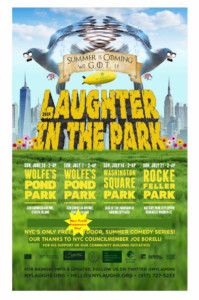 “Laughter in the Park 2019,” NYLaughs.org’s signature free outdoor summer stand-up comedy series on Sunday, July 2 in Wolfe’s Pond Park, Staten Island, 420 Cornelia Avenue at 2 pm. There are 4 weeks of programming in 2019 coming to some of NYC’s most iconic public parks: Rockefeller Park, Washington Square Park and Wolfe’s Pond Park in Staten Island. All headliners, as well as most performers, have major television credits. Joining Damien is Comedy Central’s Christian Finnegan and Matt Richards, the newest comic to join the HQ Trivia team of hosts. There may be a possible appearance and joke told by Councilmember Joe Borelli, too! Bios are below.

NYLaughs’ announces our free “FUN”-raiser 2019 on July 7, as well:
Now that our summer series “Laughter In The Park” is in full swing, it feels like Christmas in July and we’re looking to spread all kinds of joy this holiday weekend.. While it’s not great weather for snow angels, it’s perfect for bringing laughter and community engagement to the people by inviting several local Staten Island charities to have a visible presence at our event on Sunday. We’re calling that day we created, “NYLaughs’ ‘FUN’-raiser 2019”! So we encourage all civic-minded New Yorkers to head out to Wolfe’s Pond Park this Sunday from 2-4 for some amazing free live performances and an opportunity to engage with some great organizations that have been working to improve our communities. Sure, it might be a smidge too early to strike up a rousing chorus of Jingle Bells, but the spirit of cheer and goodwill lives with us year round! List of participating organizations will be listed at www.nylaughs.org.

More talent announcements to come. Updated talent bios always available at www.nylaughs.org. All shows are rain or shine, although we prefer to shine! We promise to make climate change funny! Contact details and information for the public can be found by visiting www.nylaughs.org or calling 917-727-5233. Line-ups are subject to change.

#LITP 2019 is a passion project run solely by KICK-ASS volunteers. Funding for #LITP 2019 is made possible in part with the generosity, support and public funding given by the NYC City Council Discretionary Fund and Councilmember Joseph C. Borelli and the Battery Park City Authority, in addition to grants via the Washington Square Park Conservancy, The Laura B. Vogler Foundation, The Educational Foundation of America and The Foundation for Fairer Capitalism.

NYLAUGHS.ORG’S SUMMER COMEDY SERIES
“LAUGHTER IN THE PARK 2019” (#LITP 2019)
Show details and times for the series are:

Talent Bios:
Christian Finnegan
Christian is perhaps best known as one of the original panelists on VH1’s “Best Week Ever” and as Chad, the only white roommate in “Chappelle’s Show’s” infamous “Mad Real World” sketch. He played Martin on the popular syndicated sitcom “Are We There Yet?” and politics junkies will recognize Christian from his many appearances on “Countdown with Keith Olbermann”. Most recently, Christian was the creator and co-host of A&E’s “Black & White”, which examined current events and social trends through the lens of Race.

Michael Kosta
Michael Kosta is a stand-up veteran who has appeared on “The Tonight Show”, “Conan”, “Late Night with Seth Meyers “and “@midnight.” Michael has been a fixture on TV since his breakout performance at HBO’s “U.S. Comedy Arts Festival.” Prior to “The Daily Show with Trevor Noah,” Michael co-created, produced and starred in “The Comment Section,” guest-hosted “Attack of the Show” and co-hosted “Crowd Goes Wild with Regis Philbin.” He also served as a correspondent on “The Soup” spinoff series “The Soup Investigates” Michael starred in his own stand-up special, “Comedy Central Presents: Michael Kosta”, and released his comedy album, “Comedy for Attractive People,” in 2015.

Damien Lemon
Damien is the host of truTV’s “Comedy Knockout.” He was chosen a “New Face” of 2013’s Montreal Just for Laughs Comedy Festival as well as a featured performer on Whitney Cummings’ Gala show that aired on HBO. Damien has been featured on MTV2’s Hip Hop Squares and performed stand-up on Russell Simmons: The Ruckus on Comedy Central. He is a series regular on MTV’s Guy Code, Guy Court, and the upcoming Most Extreme Elimination Challenge.

Matt Richards
Matt was selected as a New Face Character at 2018’s “Just For Laughs Festival” in Montreal and was a standout in the 2017 CBS Diversity Showcase. Matt is the VO host for the pop culture game show Trivial Takedown for FUSE and has written for the past two seasons of Jokers Wild starring Snoop Dogg on TBS. Matt is currently the newest comic to join the HQ Trivia team of hosts- catch him on an iphone near you!

Roy Wood, Jr.
Roy’s comedy has entertained millions across stage, television, and radio. Roy joined Comedy Central’s Emmy-nominated hit series, “The Daily Show with Trevor Noah” in 2015. In 2017, he was named the new host of Comedy Central’s storytelling series, “This is Not Happening,” which will launch the fifth season next year. His first Comedy Central one-hour stand-up special, “Father Figure,” premiered in 2017 along with an extended uncensored album of the same name released by Comedy Central Records. His second Comedy Central one-hour stand-up special, “Roy Wood Jr.: No One Loves You,” premiered at the beginning of 2019 on January 25th. Roy Wood Jr. was on Variety’s 10 Comics to Watch For list in 2016.

ABOUT NYLAUGHS.ORG
MISSION:
To enrich NY lives through laughter while deepening an appreciation of the art of stand-up comedy

Aspiring FUN NEWS organization, NYLaughs (www.nylaughs.org), was established in 2007 with the belief that laughter makes the world a better place by fostering informed, engaged and empathetic communities. We also work to deepen an appreciation of comedy as a cultural asset and seek to include comedy as a creative alternative to tackling societal issues. The way that we do both is by producing free comedy shows in public spaces. We think unexpected laughter in unexpected places can send a powerful message to the psyche and be a catalyst for unity. The organization is volunteer run by proud native New Yorkers to bring leading comedic artists to New Yorkers for free to deepen an appreciation of the art form and make live performances available regardless of age, sobriety or social strata. Each show draws a diverse group of New Yorkers together through humor on stage and off.

For more info, visit our website at www.nylaughs.org. We want to make laughter a part of the daily urban experience! Comedy matters. Let laughter change the world!