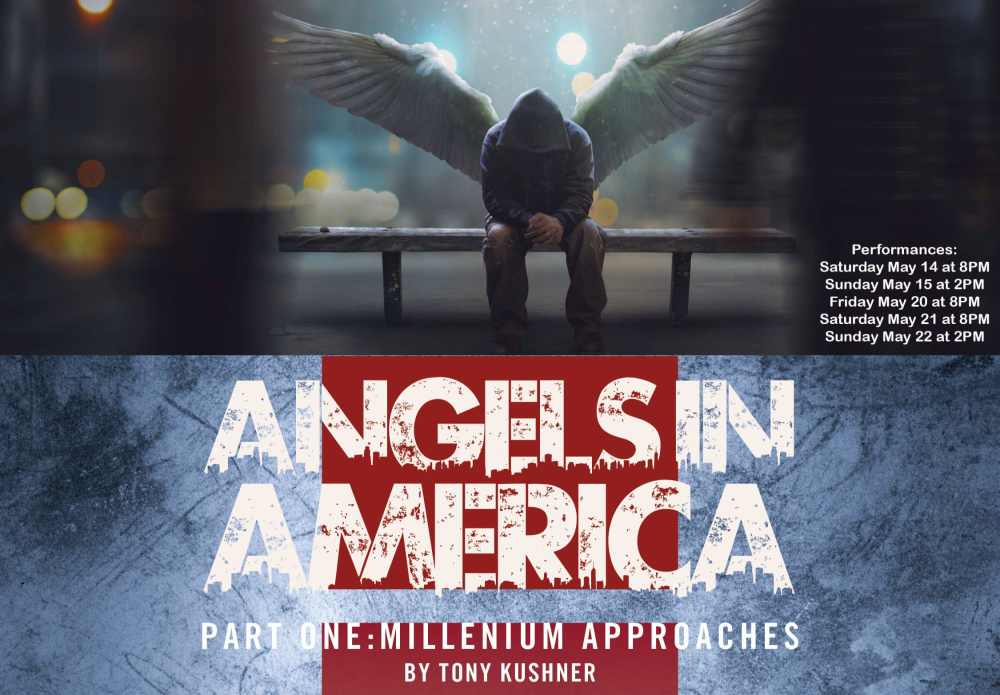 May 15 and 20-22. Tickets here: our.show/svptangelspartone

2 hours and 45 minutes with two intermissions

All sales are final.

Jai Sada is thrilled to return to the Seaview Playwright Theater stage, where he was last seen as Amir Kapoor in “Disgraced”. He was happy to play the role of Beverly Carlton in Ghostlight Players recent production of “The Man Who Came To Dinner”, where he also was Assistant Director to Anadina Saladino for their smash production of Lynn Nottage’s “Sweat”. He has performed in and around New York, as well as in Europe and nationally in Summer Stock. His favorite roles include, Daddy Warbucks in “Annie”, Fagin in “Oliver!”, Judas in “Jesus Christ, Superstar”, Don Rodrigo in Anadina Saladino’s “Trouble At Home”, and Bernard in both the stage and film versions of “Hate Street” (Best Actor-Santa Fe Film Festival.). He thanks the entire incredible cast who forced him to be on top of his game due to their brilliance,our wonderful Director Ken Tirado and Producer Joe Gherardi who did not have to believe in me, but they did, and everyone associated with this production. Special thanks to Gary, Charlie, Anadina, and Vincent, and most especially my Crystal, the brightest gem in the world, and to you, our audience. Your support is everything! Stay safe!

Cheryl Grogan is proud to be part of such a wonderful cast and crew. Some past credits include Sundog Theatre”s 20th Anniversary Ferry Plays, Sarah from Time Stands Still, Sister Woman from Cat on a Hot Tin Roof , Lil Bit from How I Learned to Drive – all performed at Sea View Playwright’s Theatre. Cheryl would like to thank Gene, for being the Captain to her Tenielle, as well as for his love, support, and high adventure!!. Lastly, thanks to all our audience members who support local theatre.

RYAN TAYLOR (Prior Walter) is blessed to make his debut with Seaview Playwright’s Theatre. Previous roles include Mamma Mia! (Pepper), Beauty and the Beast (Lefou), Cabaret (Victor/Bobby/Lady #2), The Sound of Music (Frederic Von-Trapp). A Staten Island native, Ryan is currently pursuing a degree in Music Production with the Los Angeles Recording School. This one is for all the Angels who came before, who stood and fought with us, who have left this world better than they found it. Thanks to all involved.

Nick Easton (Louis): Nick is thrilled to return to Seaview Playwright Theatre’s stage, last appearing as Louis in A View from the Bridge. Some of his past favorite performances include: Dog Sees God, As You Like It, Romeo and Juliet, The Idiot Box, Saint Joan of the Stockyards, Arms and the Man, and his original show: Reconstructing Reality. Nick has a degree in Dramatic Arts from CSI. He is also a director, dramaturg, and playwright. Nick would love to thank Ken Tirado for the opportunity to work on a masterpiece of such importance, as well as Louisa and the rest of the crew. Extra thanks to the incredibly talented and supportive cast; you’ve been true Angels.

Anthony Casiano (Joseph Pitt) is very excited to return to SVPT for his second appearance. His first time with SVPT was in Man of La Mancha back in 2015! Other show credits include The Man Who Came to Dinner, Mamma Mia, Beauty and the Beast, 42nd Street and Gypsy. He would like to thank Ken for the incredible opportunity and direction, Jai for his constant mentorship and belief in him to take this on, his wonderful fellow cast and crew and to all his family and friends who continue to support him over the years.

Gabrielle (Harper Pitt) is a New York City/Staten Island based actress and no stranger to the Seaview Playwrights Theatre stage. Most recently, you may have seen her in All My Sons and A View from the Bridge. She is so humbled to be a part of this production of Angels In America. She gives special thanks to the cast for their support and constant encouragement; thank you to Ken for his crafty direction and for giving the cast the freedom to explore their creativity. AND of course—thank you to Louisa and the Crew! “We appreciate you so very much!” You can catch Gabrielle in the upcoming production of The Rose Tattoo by Tennessee Williams and directed by Joe Gheraldi here at Seaview! Thank YOU for supporting the arts in our community!

Charles Murria (Belize/ Mr. Lies) is a NYC director, actor and arts administrator. His last project was assistant director of Good Greif (Ghost Light Players). His most recent acting credits included Castaño in Trouble at Home (CSI), Actor 4 in We are Proud to Present… (SIST), Castaño in Trouble at Home (SIST), Player 2/Pantheno in Two Gentlemen of Verona (SIST), Second Murder in Richard III(SIST). When he is not on stage, he is managing ticket inventories for Manhattan Theatre Club. He is very Thankful to work on such an important piece of theatre.

Lucia Williams, “The Angel, ” “The Voice,” and “The Woman in South Bronx” is a Miesner – trained actor from New Jersey. She is a recent graduate of William Esper Studio in New York City. Lucia had the honor of making her on-stage debut at the New York Theater Festival’s 2021 Winterfest as Ericka in WHERE YOU AND I GO WHEN THE LIGHTS GO OUT, a one-act play produced by The Pressure Players. Recently, she played Cynthia in Lynn Nottage’s SWEAT, produced by Ghostlight Players SI. A screenwriter and aspiring director, Lucia hopes to bring more compassion, hope, and laughter into this world. She gives all thanks to God for the blessing of bringing a dream to fruition. Lucia is excited to perform on the Seaview stage and thanks everyone at Seaview and director Ken Tirado for this amazing opportunity.

ELISE WALKER (Nurse/Emily/Sister/Ella Chapter) is making her acting debut. She recently retired from the NYC Dept. of Probation and is a licensed social worker and family therapist. She is delighted for the opportunity to work with this talented cast, in such an important theatre piece.