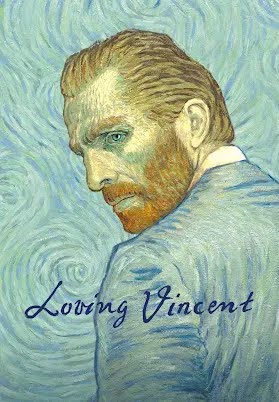 Loving Vincent Drama · 2017 · PG-13
The life and controversial death of Vincent van Gogh told by his paintings and by the characters that inhabit them. The intrigue unfolds through interviews with the characters closest to Vincent and through dramatic reconstructions of the events leading up to his death. Loving Vincent features 120 of Vincent van Gogh’s greatest paintings. The plot, drawn from the 800 letters written by the painter himself, leads us to the significant people and events in the time prior to his unexpected death. Every shot is painted just as Vincent himself painted.

LOVING VINCENT is the world’s first fully oil painted feature film. Written & directed by Dorota Kobiela & Hugh Welchman, produced by Poland’s BreakThru Films & UK’s Trademark Films. The film brings the paintings of Vincent van Gogh to life to tell his remarkable story. Every one of the 65,000 frames of the film is an oil-painting hand-painted by 125 professional oil-painters who traveled from all across the world to the Loving Vincent studios in Poland and Greece to be a part of the production. As remarkable as Vincent’s brilliant paintings, is his passionate and ill-fated life, and mysterious death.