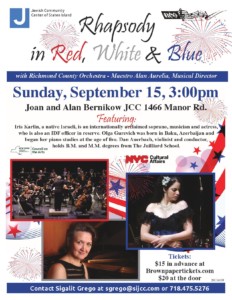 $20 at Door Children and Students admitted for FREE

Next stop for the 21-year-old Richmond County Orchestra is Carnegie Hall where they perform on November 3.

Founded in 1998, under the direction of Maestro Alan Aurelia, The Richmond County Orchestra continues its effort to enhance the musical and cultural life of Staten Island and strives to  inspire a love of music through a presentation of the classical repertoire and programming that encourages interaction with audience members. The orchestra offers live performances in the three council districts of Staten Island, presenting works of living composers as well as music from the past, providing its listeners with an opportunity to explore a new artistic language. In addition, the RCO offers educational innovations designed to capture the interest of young students who want to pursue a career in music. Musicians from the RCO have gone into high schools and coached students in after-school programs which have culminated in Side-By-Side concerts with the students and the Orchestra.

The popularity of the RCO has grown so much over the years that they have been called upon to perform in various venues throughout the tristate area, including the Guggenheim Museum, the Museum of Natural History, Fairfield University, Washington Square Park, Asbury Park and more.

Tickets to all Richmond County Orchestra concerts are free for students and children.

Dan Auerbach, violinist, has appeared as concerto soloist with festival orchestras in the United States, Canada, and Israel. As a chamber musician, Auerb

ach has collaborated with members of the Vermeer Quartet and Juilliard Quartet, the New York Philharmonic, and other leading ensembles. Dr. Auerbach currently serves as Assistant Professor of Music at the College of Staten Island, CUNY, where he teaches violin, viola, and chamber music and conducts t

Olga Gurevich, pianist, was born in Baku, Azerbaijan and began her piano studies at the age of five. At the age of seventeen, she moved to Moscow to study at the Gnesin Academy of Music.

The Russian school is famous for its piano sound. Ms. Gurevich earned a D.M.A. from Maimonides State Music Academy, Mo scow, Russia and a M.M. from Gnesin Russian Academy of Music, Moscow, Russia. She is a piano teacher at   Bloomingdale School of Music, a Manhattan-based, nonprofit community music school.

Iris Karlin, soprano is an internationally acclaimed musician and actress, who is also an Israel

Defense Forces (IDF) officer in reserve. She is praised for her rare combination of stage presence and musicianship from critics and conductors alike. She is a versatile leading singer singing opera, operetta, contemporary and musical theater in the tri-state area, where she has been performing with leading opera companies and orchestras.  Aside from her stage carrier, Iris is a regular soloist in The First Presbyterian Church in Englewood NJ, and at the Riverdale Temple in the Bronx. She is also an Early Education music specialist teaching at preschools in New York and New Jersey as well as teaches voice and directs, conducts and produces musical shows.