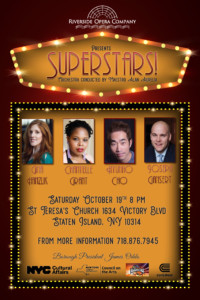 This performance is Free for Students and Children Tickets. All other tickets are $15 in advance and $20 at the door. To purchase visit: bit.ly/roc-superstars

The 23-year-old Riverside Opera Company is based on Staten Island in New York City. It performs fully and semi-staged productions with a full orchestra conducted by Maestro Alan Aurelia who has conducted in Italy as well as in the U.S. Its singers are winners of open public auditions, held in New York City.

ABOUT THE FEATURED PERFORMERS:

GINA HANZLIK Performing with an “aplomb rarely seen” (Le Devoir) and “a voice that is both brilliant in technique and deep in expressiveness” (Ludwig van Montreal) soprano Gina Hanzlik is known for her deep commitment to character and delivery. Opera credits include the Cunegonde (Candide), Lucia (Lucia di Lammermoor), Adele (Die Fledermaus), Madame Herz (Impresario), and Sister Rose (Dead Man Walking). She has performed with Opera McGill, Tapestry Opera, the Banff Centre, Michigan Opera Theater, McGill Symphony Orchestra, Société d’art vocal de Montréal, and regularly premiers work with 23Degree Theater. She is a Teach for America Alumni and holds degrees from the University of Michigan, McGill University, and the University of Minnesota-Twin Cities. Ms. Hanzlik is a Teaching Artist with The Metropolitan Opera Guild.

CHANTELLE GRANT Earlier this year Ms. Grant had the pleasure of singing with Trilogy: An Opera Company as Erda in Wagner’s Siegfried and the role of Monisha in Joplin’s Treemonisha.

Ms. Grant has had the pleasure of working with outstanding maestri such as Joseph Colaneri, Steven White, Timothy Myers, and Peter Oundjian. Ms. Grant has performed on such illustrious programs as the American Song Book series at Lincoln Center, and the Kennedy Center Honors.

Chantelle’s roles have included Mistress Quickly in Verdi’s Falstaff, Madame Larina in Tchaikovsky’s Eugene Onegin, Moyra in Vaughan-Williams’ Riders To The Sea, and Mrs. Grose in Britten’s Turn Of The Screw. Currently, a student of Arthur Levy, Ms. Grant holds a Bachelor of Music degree from the University of Windsor, an Artist Diploma from the Glenn Gould Professional School and a Professional Studies Diploma from Mannes College. Chantelle Grant has had the honor of studying with operatic legends, Martina Arroyo, Regina Resnik, and Jane Eaglen.

He recently performed Te Deum as a soloist with Queensboro Symphony Orchestra in New York and he will make his European debut as Don Jose with Les Maîtres Sonneurs at Toulouse in France on April.

Looking for something fun to do on Staten Island before school starts?